Animation executives from across Africa have revealed their desire to tell “African stories in an African way” during what they describe as a “golden era” for the industry.

A panel called Defining the World Markets at the MIA event in Rome this week brought together talent from Morocco, Ghana and South Africa to discuss the continent’s burgeoning industry and how the growth of tech and its booming  population of young people means content is being produced in new and innovative ways for an increasingly large audience.

Mounia Aram, founder and distributor at MA Company, which is based in France and Morocco, said challenges facing aspiring animation studios were related to infrastructure but that the industry in Africa is on the cusp of breaking out internationally.

“It’s hard sometimes in some countries with electricity or internet shutdowns, so you need to be creative in terms of infrastructure,” Aram said. “It’s an emerging industry, it’s really small. But it’s really exciting because we’re at the beginning of something really huge and we are happy to work hard because we are passionate about it. We see the potential in African animation but it will take time. Patience is also the key.”

Sithembiso Mpehle, exec producer at South Africa’s Tshimologong, said: “What you’re witnessing now is the first generation of independent animators who are making that wave from an African point of view. Even though there are these challenges – infrastructure, finances –we’ve got a bubbling industry that’s emerging.

“There’s an energy about it and people are not waiting for some miracle to come and say, ‘Hey guys, here you go. Here’s an industry.’ They’re actually making it for themselves and in that space is a lot of collaboration that happens and if you look at any industry, where there is collaboration, that’s where industry is born and how industries grew. It’s happening now.

Mpehle also credited the “advent of technology” for making it possible to allow producers to communicate with each other across the continent.

“When I started my animation studio in 2015, to have 1,000 views on YouTube organically was an achievement. Now people are making millions in a week. That shows there’s more people with phones and the internet, that shows there’s a market,” he said. “Now there’s an independence that’s growing where people are taking power into their own hands and not waiting. If you problem-solve, you’re an artist and that’s the credit we need to give a lot of Africans. It’s just a matter of time when there will be a booming industry, but there’s a desire to tell African stories the African way.”

Francis Y Brown, founder and creative director of AnimaxFYB in Ghana, added: “We are definitely in the golden era of animation industry. We still have a lot of raw talent and Africa being the youngest continent in the world, and also most populated when it comes to young people, it means there’s a huge market that’s about to blossom in Africa.” 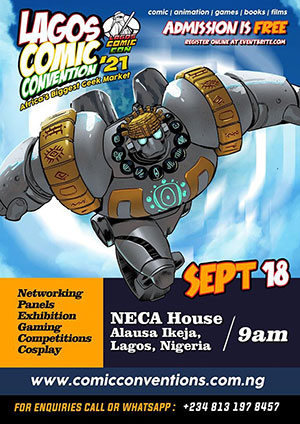 France-based distribution outfit Mounia Aram Company has unveiled plans to open a second office and studio in Morocco to follow the launch of its new African animation training programme.

Mounia Aram, founder and president of Paris-based Mounia Aram Company, told C21 she expected the Casablanca office and studio would open next year.

The second branch of the company will focus on creating and producing, while the Paris hub will handle distribution and networking, Aram added.

On why Morocco was chosen as the location of the new office and studio, Aram said: “It’s part of my strategy to focus on and promote content from Africa. For me, Morocco is the first door to Africa.”

The new hub follows the announcement of a new animation training programme launched by Aram alongside media consultant Patience Priso.

African Creative Talents will train 40 students, at least half of whom will be women, over a three-year period and will also be based in Casablanca. The programme, which will involve an internship at an African studio, is set to start in January.

It is hoped that once students complete the programme they will be employed at Mounia Aram Company’s studio in Casablanca, Aram added.

Aram said: “I’m really eager to work with talent in Africa but there isn’t enough, and that can be a problem when you sign coproduction deals, and they shift the production away from Africa because there aren’t enough trained animators. I decided to launch African Creative Talent to keep talent in Africa.

“It’s also very important to have at least 50% female students because we have a lot of creative women in our industry, but they need to be more visible and have more access to education.”

Mounia Aram Company was founded in 2019 to promote African talent internationally, with a particular focus on animation through international coproductions and sales.

On its development slate are titles such as The Makerbolts (52×11’) from Nigeria, Message Beats (36×11’) from Ghana and The Troublemakers (78×7’) from Mozambique, while the company also handles distribution of content from Splash Entertainment among other producers.

Paris- and Angoulême-based Chouette and distribution specialist Mounia Aram have teamed up with Kiro’o Games in Yaoundé to adapt the IP for the small screen.

Based on African mythology, the PC game launched in 2016 and since then Kiro’o Games has been expanding the brand into comics and smartphone games, with an animated series the next ambition.

The series will begin by recounting the Kori-Odan saga that is at the heart of the game, plunging viewers into an African fantasy world with love, action and existential dilemmas, the producers said.

A copro between Kiro’o Games and Chouette Company, production will be carried out by the artistic teams of both companies between their studios in Yaoundé and Paris.

Mounia Aram Company, set up in 2019, will oversee the distribution of the programme, as well as licensing.

Olivier Madiba, CEO of Kiro’o Games, said: “We have created a simple and deep fantasy universe which can be exploited for 30 years, depending on the ambitions of partners. Behind the action and drama, Aurion is mostly about the quest buried in each of us: who am I? What is the purpose of mankind?”

Mounia Aram, CEO of Mounia Aram Company, said: “I’ve been eager to bring African animation to another level since I’ve launched my company. Aurion is the perfect show to start with; it brings tradition along with a modern aspect of African tales. Partnering with Kiro’o and Chouette, I believe that we will bring together a fantastic story with a strong African DNA.”

Sylvain Dos Santos, chief creative officer of Chouette Company, added: “The Aurion universe is one of the most exciting and lavish creative universes I’ve come across in recent years. It immediately won me over, and I’m convinced that, with Kiro’o, we will develop it into an incredible animated saga.”