Team Gelah (Ahneeka and Angel) have been ejected from the Big Brother Naija (BBN) house during the reality programme’s live eviction show this week.

Speaking to Ebuka Uchedu, host of BBN, about her eviction, Ahneeka said it came as no surprise to her. She plans to go back to TV presenting and modeling.

Ifu Ennada and Leo were also nominated for eviction but were saved by audience votes. The pair also won the Pepsi ‘Roc da mat’ challenge and will be given a N5m cash prize and an all-expense paid trip to London for the One Africa Music Festival, plus a year’s supply of Pepsi.

Of the three teams nominated for eviction – Gelah (Angel and Ahneeka) Ceelo (Lolu and Cee C) and Lifu (Leo and Ifu Ennada) – Ceelo got the highest number of votes, 44.67%, while Gelah and Lifu received 26.97% and 28.37% respectively.

Uchedu announced this week that housemates of the show will no longer be paired. BBN season three continues with 10 participants. The show airs 24 hours daily on DSTV channel 198 and GOtv channel 29.

Ebuka Uchedu, Mazino Ofoh and Andre Blaze will return to front the show, offering opinions on topics as varied as sport, politics, women, cars and relationships.

The season airs on DSTV channel 165 and will continue in the same 22.00 slot on Tuesdays.

EbonyLife TV is a pan-African entertainment and lifestyle TV channel. Its original series include Moments, EL Now, Love Lounge, Fifty the series and Sons of Caliphate. 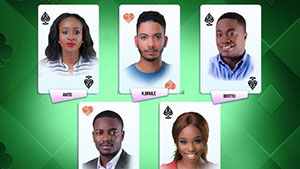