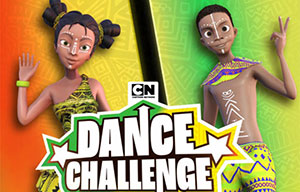 Moshood, who hails from Nigeria, is the creator of Garbage Boy & Trash Can. The judges were impressed by the project’s characters, graphic style and absurdity. It is the story about a garbage boy who assumes he has super powers he can use to fight for justice together, with his trash can.

“Ridwaan’s style is a perfect fit for the channel and shows fantastic graphism that makes the show instantly lovable, unique and full of energy,” said Ariane Suveg, programming director and head of kids’ content for Cartoon Network Africa.

In June this year, African creators, animation students, artists and writers were challenged to design innovative and local shortform content that reinforces the local importance of the brand. In September, 10 projects were shortlisted out of 250, which were then pitched to Cartoon Network Africa’s content team.

“We were pleasantly surprised by the wealth of animation talent on the continent and the selection panel had a tough task. The editorial guidelines for the channel were very specific, and yet we received many applications,” said Suveg.

The runners-up were Intergalactic Ice Cream, from South African toonist Andrew John Phillips, whose storyline centres on a delivery boy’s adventurous after-school job; and Majitu, a project by Kenyan Mark Kinuthia, which follows two characters on a mission to save the world from evil.

Along with the winner, both runners-up will be given the opportunity to get their project produced as a pilot with Cartoon Network Africa, and the pilot will then premiere on the broadcaster and its digital platforms in 2019.

“We are thrilled that the Creative Lab winner and runners-up reflect the vibrant nature of the continent and look forward to collaborating with each of them. We’re excited to have seen strong African inspiration and captivating proposals all around, with strong human stakes in characters and stories that go straight to the heart,” said Suveg.

Turner Broadcasting-owned children’s pay TV channel Cartoon Network has launched an initiative to create an animated comedy for its viewers in Africa.

Cartoon Network Africa Creative Lab is inviting pitches from African talent, with the winning idea being made into an original shortform show.

According to the company, Africans are well-known for their humour and storytelling, and this initiative seeks to promote that by encouraging local content creation that remains relevant.

Ariane Suveg, head of programming and acquisition at Turner Kids Africa, said the initiative had been inspired by the pitching contest at content market Discop in South Africa in 2016.

“As sponsors of the Discop 2016 Animation Pitching Programme, we were exposed to some really inspiring local animation projects,” Suveg explained.

“We were so impressed by Cape Town-based Punch Monkey Studios’ amazing creative energy in the winning entry, Cloud Life, that the project has since been travelling through the Turner Group and is now in a development process with the Turner Asia Pacific production team.

“This just reinforces our need to invest in local content and our commitment to further mentor talent in the African animation industry.

“We are honoured to be supporting local African animation talent through the Cartoon Network Africa Creative Lab. We look forward to seeing the entries and hope to see the winners flourish in their careers as content creators, following in the footsteps of some of Cartoon Network’s greatest talents.”

Interested participants must be 18 and above to qualify. Entries should be of the comedy genre and should be submitted as a one-minute or three-minute video. Submissions will end on August 31.

In September, 10 participants will be shortlisted to pitch their project to Cartoon Network Africa’s content programming team. Three finalists will be revealed at Discop Johannesburg in November.

The finalists will have their work produced as a pilot with Cartoon Network Africa, with the show airing on the channel in 2019.