Nigerian animator Mbuotidem Johnson tells Content Nigeria about the challenges facing his industry and his plans for his company, Basement Animation Studios.

The animation industry in Nigeria has often been overlooked, especially by audiences who are unaware of the power of storytelling with animation.

Mbuotidem Johnson, founder of industry body Animation Nigeria and creative director of production company Basement Animation Studios, told Content Nigeria about the problems plaguing the animation business, what is being done about them and – above all – how the industry is growing.

In a bid to address the many problems that hold back the industry, Johnson created Animation Nigeria, a non-profit organisation that aims to establish the Nigerian animation industry by ensuring adequate promotion and visibility, both locally and internationally.

Johnson also discloses the plans he has for Basement Animation Studios and the projects the company has been involved in so far. These include coproducing the pilot episode of TV series L’arbre à Palimpseste, from Togo studio Nebularts and animator Ingrid Agbo, which was selected for Annecy-MIFA Pitches Animation du Monde 2018 and awarded with The Gulli Prize.

As the founder of Animation Nigeria, can you give us an overview of your plans?
Animation Nigeria [AN] is a body that helps offer a better perspective on what we are about for the government and to help structure the animation industry. Before now, different studio heads have had such an idea of putting things together but have been met with a number of challenges. I didn’t know this until I started the organisation.

After I attended Discop 2016, I had a discussion with representatives from Animation South Africa and I told them about starting the same thing over here. We deliberated and they advised me on what to expect, from the difficulty of getting government attention to the benefits and flaws associated with it.

On returning, I contacted some studio heads based here, told them my vision and we began the process. As a non-profit organisation, we are still in the process of putting everything in place, because it’s a long process. Nevertheless, we’ve been able to partner with the African Animation Network [AAN], which is based in South Africa. We are looking over the whole network of Africa whilst trying to create synergy and collaboration between different countries.

AAN has been a big partner, supporting us at Discop and giving us opportunities to showcase things that have to do with our industry. A big win for AAN was when we went to Annecy in June and they partnered with Annecy in terms of the pitching competition within Africa. The finalist chosen from Africa also won at Annecy 2017. It was a huge deal, not only that they won but that a big channel network, Gulli in France, picked up their project. That was kudos for two years of hard work.

For AN, we have had a lot of discussions with studios trying to see how they can create their own IP. A lot of studios in Nigeria do more of service work – like advertising – rather than create their own content. Everyone is sceptical about doing that because it requires funding and to keep a studio afloat for a couple of years before any returns is quite difficult.

Would you say these challenges are particular to Nigeria?
Not really, but Nigeria has its own cases. Like having to run a studio with unstable power supply or a lot of animation companies going after projects in the same market because there are very few agencies available. These are some of the causes but some of these are normal challenges worldwide.

We started our project two years ago and focused on producing our own IP, which is why we began attending Discop and other markets. During that process we met Nebularts, a studio from Togo that was in the pitching competition. We coproduced their pilot episode that won at Annecy.

The perspective I’ve always been selling is how to get the studio funded without government support. In this country, we have a media industry, Nollywood, that produces content in a week with low budgets. But it takes us about two years to produce animated content, and this makes many prospective sponsors reluctant to support with funding because the returns are not as swift.

With this in mind, we decided to move into coproduction, partnering with studios that can produce quality content and reach out to other continents as well.

Presently, we are in talks with Ingrid Agbo (Nebularts), the owner of the IP, and studios from Burkina Faso and Madagascar, to coproduce a full 52×7’ season of L’arbre à Palimpseste, which was selected at Annecy. With this, we’ve broken the norm by working on coproduction based on our business formula and are able to fund the studio and get the necessary equipment. We keep producing and having a big network like Gulli pick up one of our projects has given us credibility, not only for Basement Animation but the animation industry in Nigeria.

How do you go about distribution?
For coproduced content, they’ve got Gulli ready to showcase it, and also putting in funds for the project. They also raise funds from different countries, some of these have policies put in place and the government tends to fund the project because a studio within their country is producing.

For our own content, we are in discussion with producers in France. We also pitched some of our ideas at Annecy in June and are working out the details. However, many companies are reluctant to sponsor a new studio and also one in another continent but our projects have given us credibility and we’re being taken seriously.

Do you have any plans to produce, coproduce and distribute shows in Nigeria?
Yes, we do. But it’s all about funding. Even when studios want to collaborate, getting the money is the question on everyone’s mind. Networks are also hesitant to fund animated projects; they usually tell us to produce it first and then they’ll buy it. Then studios get stuck because there is no one ready to invest.

With our own IPs, we’re thinking of other angles such as creating shortform shows rather than 11-minute episodes, distributing them online, gathering audiences and leveraging brand placement. From there we finally get our show in the market.

At the Annecy market, we had a number of companies offer to have our content on their platforms based on certain conditions, such as showcasing our content and generating income if we reach a certain number of views. They are not ready to invest but it is easier compared to doing 11-minute videos with no returns.

The first two projects selected to compete in the African final of the Annecy – MIFA Pitches Animation du Monde have been revealed.

Étincelle, represented by Ouassila Kharoune (Burkina Faso), and Koka Kitoumbou, represented by Shikartoon (Congo Brazza), have been selected from the five competitors that were shortlisted at the recent Discop Abidjan market in Ivory Coast.

The pitch competition is a partnership between the Annecy International Animated Film Festival and Market/MIFA (Annecy/MIFA) and the African Animation Network. 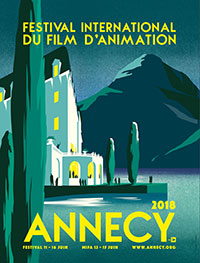