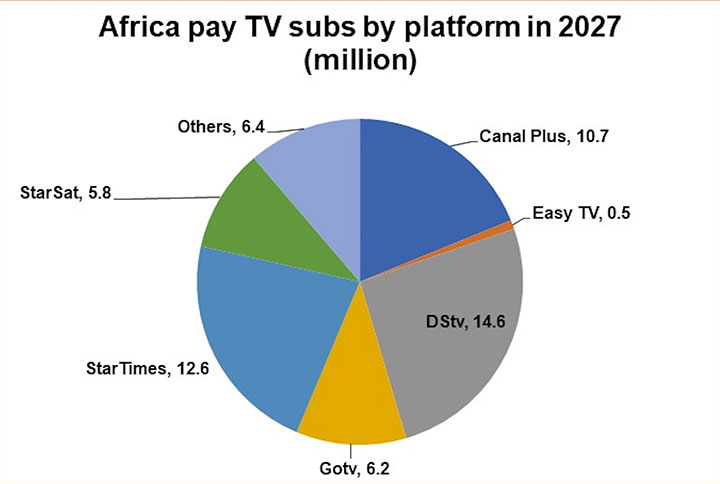 The number of pay TV subscriptions in Africa is set to climb from 39 million in 2021 to 57 million by 2027, according to newly released projections from UK analysis firm Digital TV Research.

However, while the number of subscribers is predicted to grow by 46%, the revenues derived from those subscriptions will rise by only 35%, due to the fact Africa’s three dominant pay TV providers – Multichoice, StarTimes and Canal+ – will reduce their prices as they tussle for supremacy in the region.

By 2027, South African broadcaster and pay TV provider Multichoice will have 20.8 million subscribers across its DStv and GOtv platforms, said the research firm. Meanwhile, Chinese media company StarTimes, which has a significant presence across sub-Saharan Africa, will grow to 18.4 million, and Vivendi-owned French company Canal+ will climb to 11.2 million subs.

While the pay TV sector in Africa is set to grow significantly over the next five years, data from Digital TV Research indicates that OTT will grow at a much faster rate. A report released last year suggested revenue from movies and TV series on OTT platforms in Africa will reach US$1.7bn by 2026, compared with US$392m in 2020. Around US$1.5bn will come from SVoD platforms, said Digital TV Research.