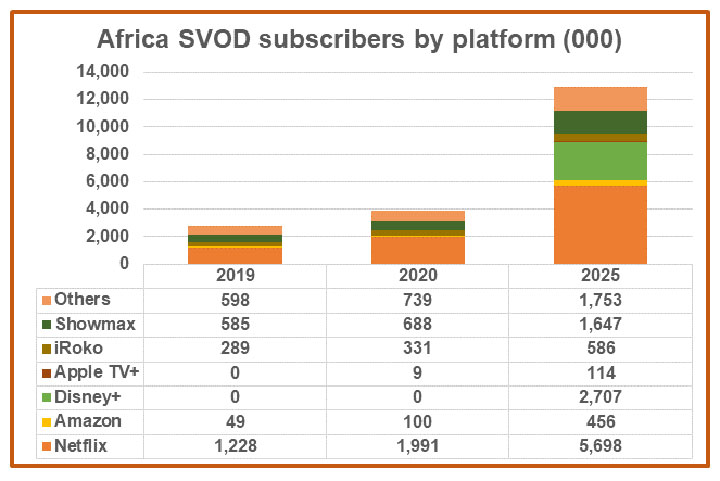 African SVoD subscriptions are on the rise for services such as Showmax, Netflix and iRoko, according to recently released data.

According to UK-based Digital TV Research, Africa will have 12.96 million SVoD subscriptions by 2025, up from 2.75 million at the end of 2019. South Africa will account for three million by that year, to take its total to 4.3 million, while Nigeria will add 2.1 million to make a total of 2.73 million.

“Local player Showmax will add more than a million paying subscribers, partly due to the launch of its Pro platform and its lower prices for mobile subscribers. It will reach many more homes as a free extension for its pay TV subscribers,” added Simon Murray, principal analyst at Digital TV Research.

Global streaming giant Netflix, which has commissioned more locally produced content and shows that depict the cultures and experiences of ordinary Africans, has revealed plans to introduce cheaper mobile-only subscriptions in Nigeria and the rest of Africa in order to strengthen its presence in the country and the region as a whole.

Still in its trial phase, Netflix intends expanding the mobile-only contracts permanently if the trials, which began in South Africa and Egypt, become a success.

It is, however, offering subscribers N1,200 (US$2.65) a month for its mobile-only service, well below the N2,900 it has been charging for its most basic account.