Pay TV subscriptions in Africa will rise to 51 million in the next five years, according to a report by UK-based analysis firm Digital TV Research. 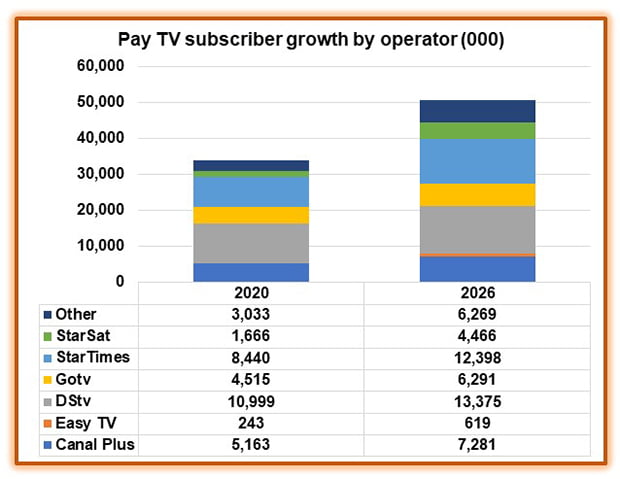 The report, titled Africa Pay TV Forecasts, predicts that nearly 17 million pay TV subscribers will be added in Africa between 2020 and 2026.

Of the total, Nigeria will account for close to 11 million, with South Africa bringing in nine million.

Simon Murray, Digital TV Research’s principal analyst, expects this figure to rise to 19.7 million by 2026 “with a marked slowdown of satellite TV growth.”

China-based StarTimes and StarSat will experience the most impressive growth, with combined subscriptions in Africa increasing from 10.1 million at the year end to 16.9 million by 2026.

France’s Vivendi, which had 5.4 million subscribers to its Canal + satellite TV platform and EasyTV in Africa by the year end, will see this figure rise to 7.9 million by 2026.

Meanwhile, other pay TV providers in Africa combined will go from three million subscribers at the end of 2020 to 6.3 million by 2026.