Afenfia novel to be adapted for TV

Nigerian author and social commentator Michael Afenfia is to have his 2020 novel The Mechanics of Yenagoa adapted for television.

The novel, published by Lekki-based Masobe Books, centres on the life of a hapless mechanic but is also an exploration of the dynamics between working-class people as they undertake a colourful tour of Yenagoa, one of Nigeria’s lesser-known cities.

The TV adaptation rights have been acquired by Lagos-based film and TV production and distribution company Marturion Media, a company set up in 2015 by entrepreneur Michael W Ndiomu and is affiliated with the Marturion Cinemas chain.

Content Nigeria interviewed Afenfia to find out the inspiration behind the novel, what societal issues it addresses and why it will be suitable for TV.

“The title came from my wanting to put the name of the city I lived in at the time on the map. I also wanted to generate positive conversations around the city and its people. At the time I started writing the story it was a weekly series on my blog,” Afenfia said. 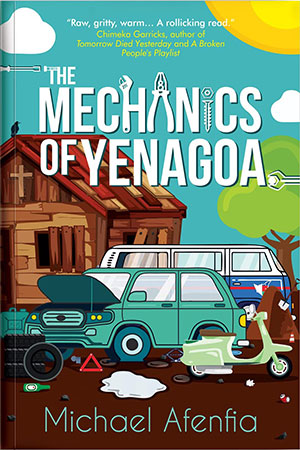 “The novel addresses a lot of issues. There’s definitely a bit of politics and the quality – or lack thereof – of leadership in our country. You will also find something about religion and how it is often used as a tool for exploitation. There’s drugs, unemployment and criminality. Above all, the book speaks to our common humanity and how people sometimes find themselves doing things out of peer pressure or greed.”

“The adaptation for TV came about [thanks to] the producers of the series, who liked the book and the stories in it. We were contacted and the rest, like they say, is history. I have been told the adaptation would take the form of a series but that is all I can say for now.

“The Mechanics of Yenagoa was released June 15, 2020. To think that this is happening within less than one year of its release is mind-blowing. This is a moment of gratitude and humility.”

Other books written by Afenfia include Don’t Die on Wednesday (2014), A Street Called Lonely (2011) and When the Moon Caught Fire (2010). The production date for the series is yet to be announced.