The number of pay TV subscribers in sub-Saharan Africa will have increased by 74% between 2017 and 2023 to reach 40.89 million, according to Digital TV Research.

Seventeen million pay TV subscriptions will be added in that time period, with Nigeria tipped to overtake South Africa in 2021 and have the most pay TV subscribers on the continent by 2023, according to the research firm.

However, the company also forecasts that subscriber growth will outstrip revenue progress in Africa. Pay TV revenues are expected to climb by 41% to US$6.64bn by 2023, up by US$2bn on 2017.

“Pay TV operators in most countries have lowered subscription fees and/or subsidised/given away equipment as competition intensifies. By no means are all of the existing pay TV platforms expected to survive in the long run. Having said that, several pay TV operators are booming.” 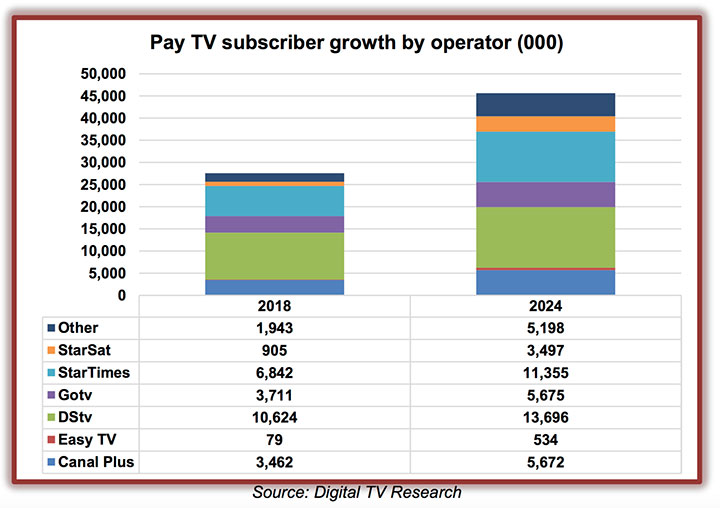 At the end of 2018, pay TV operator MultiChoice had over 14.34 million subscribers on its DStv and GOtv platforms and this figure is estimated to increase by five million by 2024.

According to Simon Murray, principal analyst at the report’s publisher, Digital TV Research: “Subscriber numbers will climb by 61% over this period, but pay TV revenues will rise by only 42% – indicating lower ARPUs. Pay TV revenues will reach US$7.72bn by 2024, up by US$2.3bn on 2018.”

The number of SVoD customers in sub-Saharan Africa (SSA) will increase from 1.56 million at the end of 2017 to nearly 10 million in 2023, according to a report from UK-based Digital TV Research.

Titled Sub-Saharan Africa OTT TV & Video Forecasts, the report estimates that across the 35 countries in SSA, there will be 9.99 million SVoD customers five years from now.

South Africa will account for 3.37 million of these and Nigeria will have 2.61 million, the report claims. The two countries are tipped to account for 60% of SSA’s SVoD customers by 2023 – down from 74% in 2017, suggesting the rest of the region is growing faster than the two main countries.

However, the report also predicts SVoD revenues will not increase massively due to the fact some of the new platforms driving subscriber growth are very cheap. SVoD revenue across SSA in 2023 is estimated to be at US$775m.

SSA’s six most popular platforms – Showmax, iRoko, Kwesé Play, iflix, Amazon and Netflix – accounted for 90% of the region’s SVoD subscribers by the end of 2017, with this proportion predicted to be retained across the next five. Despite being relatively expensive, Netflix is still expected to account for 40% of the 2023 total, with an estimated 4.03 million subscribers.

Simon Murray, principal analyst at Digital TV Research, said: “Market dynamics have shifted over the last year. There have been fewer platform launches, especially on a country level. We believe iRoko will concentrate mostly on West Africa.

“A significant stake in iflix was sold to Econet, which we believe will mean more focus on Eastern and Southern Africa. MultiChoice announced that Showmax will be given free to premium DStv subscribers across Africa, with Compact subscribers offered Showmax for half price.”

Digital TV Research is a London-based research and analytical company. It publishes more than 20 reports, covering over 130 countries, annually.